In this case, no regional or PCT patent applications will be required. The timeline will consist only of the national patent procedures in selected countries, whereas only one date is critical – submission of a national application in the second country should be made within 12 months from the earliest priority date (except for provisional applications);

In case the priority is filed as PCT application at once, the most important timeline to follow is the PCT application timeline, provided in the picture below. During the validation phase (national phase of PCT), regular timelines apply as for all national patent applications.

iv) National validation after grant = could be years

The tracking begins with the deadline of 12 months after the priority date, then PCT timeline, followed by regional applications deadlines. Finally – the national phase, during which the actual patents are issued after a process of substantive examination by the patent examiner of the patentability of the claimed invention (the process is called prosecution which generally encompasses a dialogue between the Examiner and the representative of the applicant).

There may be variations of the sequence provided above, such as avoiding the national priority application and filing PCT directly at the very beginning; or, for some countries, validation follows immediately after PCT phase, because there might be no regional application for selected countries, etc. 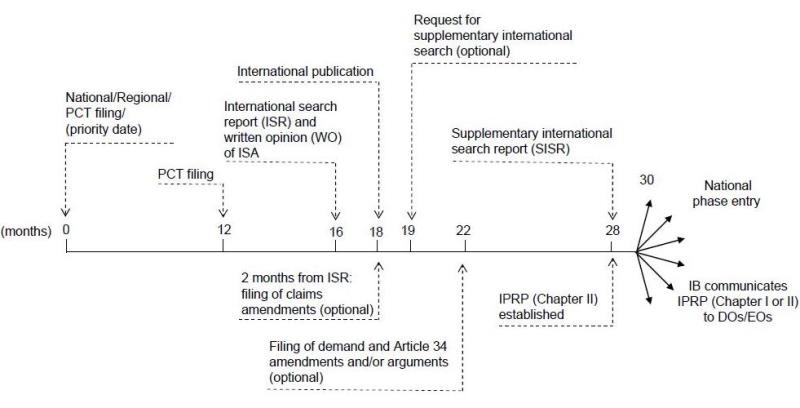 When filing a PCT application, an international search authority has to be indicated. For UK applicants, only the European Patent Office can be indicated as the International Search Authority. Some other countries can choose between two or more search authorities. Selection of an ISA is important for the validation phase (the search performed in some authorities might be not recognized by some national patent offices) as well as the search fees are different.